Banks have written off bad loans worth Rs 10,09,511 crore during the last five fiscals, Union Finance Minister Nirmala Sitharaman told the Rajya Sabha on 13 December last. The banks recovered an aggregate amount of Rs 1,32,036 crore from the written-off loan accounts, during the said period, she said. Obviously, recoveries have been measly, around 10% only.
‘‘As the borrowers of written-off loans continue to be liable for repayment and the process of recovery of dues continues write-off does not benefit the borrower,’’ said she. But when asked about the details of accounts in which loans worth Rs 10 crore and above were written off and the names of the top 25 defaulters, it is informed that disclosing borrower-wise credit information is prohibited. In other words, people are in the dark as to who, obviously the big corporates, are the defaulters whose unpaid loans are written off from the books of the banks, meaning those are categorized as non-payable bad debts. But FM says that the defaulters are not benefitting by the write-offs. But she skirts clarifying what concrete steps the government is taking to recover the dues and punish the offenders who have simply embezzled public money by not paying back the bank loans.
Likewise, when one MP from a south Indian state sought a response from the Union government on the steps being taken to tackle the depreciating rupee against the US dollar, the FM merrily sidestepped the answer and instead ridiculed the member for his weak Hindi, bad food habits and dressings. When the offended MP tried to object, the Lok Sabha speaker, also a BJP nominee, warned him saying, ‘‘if you stand up time and again, I will have to send you out’’. After a brief interruption in the proceedings, the concerned MP pointed out that when rupee was at 66 against the dollar during Congress regime, the present BJP Prime Minister had stated that rupee had gone to the ICU. So now when the rupee is at 83.20, it seems like it is heading towards the mortuary. ‘‘Does the government have any action plan to bring back the rupee home healthy from the mortuary?’’, he queried.
In response, the FM said: ‘‘India has the fastest-growing economy, but the opposition has a problem with it. Everyone should be proud of India’s growth, but some people take it as a joke…some people in Parliament are jealous. The MP should know if he is quoting Modi at that time, not just the rupee but all other economic indicators were in ICU. Today, India is the fastest-growing economy.’’ What a novel answer to a very pertinent question! Only chest-thumping and weird claims without any obligation whatsoever to provide supportive facts.
This is not the first time the FM’s comments in Parliament drew criticism. In December 2019, the Finance Minister had said, ‘‘I don’t eat a lot of onions and garlic, so don’t worry. I come from a family that doesn’t care much for onions.’’ Few months ago she said that ‘‘Indian Rupee has not weakened but in reality, it is the US Dollar that has strengthened’’. When asked about rising inflation after she placed the budget of 22-23, her answer was ‘‘Every budget doesn’t speak about inflation and its impact. But of course, talking of numbers, money, credit, liquidity, and also supply and demand of essential goods and others, you keep in mind inflation’’. When asked whether her government had set the agenda of bringing back black money and whether there is any data of recovery of black money, she said, ‘‘The money that is returning to the bank that too, in a way, is black money. I am not saying all of it is black money, but some of it is.’’ The FM and her bench-thumping party MPs and ministers have thus been demonstrating on the floor of the House how bankrupt they are in answering pertinent questions and at the same time, how adept they are in beating about the bush.
(Source: Business Insider 02-02-22, The Tribune India 13-12-22, The Wire 13-12-22) 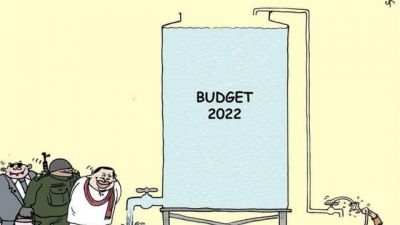 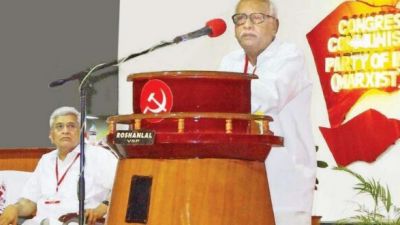 “We want left unity not for deriving electoral mileage, but only for developing militant class and mass struggles” — Comrade Provash Ghosh