Comrade Chandidas Bhattacharjee, West Bengal State Secretary, SUCI(C), in a statement issued on 20.10.22
What TMC CM is talking is a travesty of history. The TMC CM is now trying to consign to oblivion the glorious battle of Singur-Nandigram, despite her pompous self-assertion about having restored the forcibly grabbed land and included that battle in class eight syllabus. Taking advantage of this, the CPI (M) is aggressively trying to justify their heinous act against which a powerful mass upsurge had erupted throughout Bengal.
Informed and conscious people of the state know that the movement at Singur was not at all directed against industry. Under false promise of generating thousands of jobs, the CPI (M) had attempted to gift most fertile Singur land admeasuring thousand acres to Tatas thereby bringing disaster in the life of 15, 000 farmers with a promise of just a thousand jobs in exchange.
Against that, the peasants, irrespective of party allegiance, developed resistance movement under the banner of ‘‘Singur Committee for Protection of Agricultural Land’’. At that time the CPI(M) had committed rape, murder and resorted to barbaric police atrocities to evict the farmers.
The CPI (M) had followed the same process to acquire arable lands at Nandigram too. But there, the farmers led by the Bhumi Uchhed Protirodh Committee (Committee Against The Forceful Eviction), conducted a valiant resistance movement defying all red eyes and criminalities and succeeded in thwarting the move. In the meantime, Tata company shifted the factory to Gujarat where the Government then led by Narendra Modi, had offered greater facilities and more land than that offered by the CPI (M) here, still keeping the Singur land in their? possession, with their own future interests in mind.
After being installed in power, the TMC CM and her Government, presently facing severe condemnation from people because of misrule and malpractice, is finding no other way to perpetuate their rule other than securing full backing of the monopolist tycoons like Tatas, Adanis and the ilk with whom the TMC CM is trying to get closer. Hence, the TMC CM’s recent pronouncement that Tatas would not be ousted from Singur, is nothing but the reflection of this pro-capitalist policy of the state government. 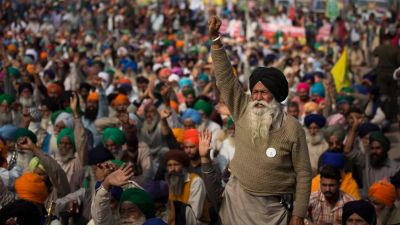