We vehemently protest the decision of the BJP-led central government to invalidate currency notes of Rs 500 and Rs 1000 overnight without making appropriate alternative arrangement thereby putting the entire economy in chaos and making common people suffer immensely. Poor peasants selling their produces in the market during the ongoing harvesting season, small traders and venders selling items of daily use including food articles, contract and unorganized workers receiving periodic payments and common households withdrawing money on occasions and in small tranches for meeting running expenditure are worst hit. On the contrary, black money which owes its origin to the decadent moribund capitalist system and accumulates in the hands of the big shots rearing and steering the system with punitive machinery remaining infructuous, would continue to be generated through various means and protected in multifarious forms like  moving it outside the country through hawala and such other illegal routes, stashing it in Swiss bank, converting it in real estate property or gold or holding it in banks in various benami (fictitious) accounts by submitting forged documents obviously with covert indulgence by utterly corrupt administration. Hence, the very claim of unearthing black money is a hoax. In the past also, governments run by the Congress feigned to take measures like demonetization of currency notes. But all these proved to be damn failures in arresting generation of black money as the ruling bourgeoisie and its servitors are generators and beneficiaries of black money and naturally the governments subservient to them are precluded from taking any effective steps. While fake currency notes alleged to have been pumped in the system by criminal forces might be immobilized for some time, question that rightly arises is how could such counterfeit notes enter the country escaping notice of such a sophisticated intelligence system and vigilance network? Moreover, how is that so many safety marks imprinted on the currency note during printing are so easily hacked by the miscreants unless there are unplugged loopholes and leakage routes?

Clearly, the government unable to check and control organized tampering of the monetary system by reprobates and offenders both within and outside the system is now passing on the entire burden of its incompetence and ineptitude on the common people already back-broken because of rising economic assault on them. The real cause of corruption lies not in circulation of fake notes but in the rapid fall in ethical and moral standards of the people in highest echelons of the capitalist system who by dint of their position indulge in and abet corrupt practices with impunity. Instead of taking stringent measures against them and recovering black money stashed away in banks overseas, this very step of the government amounts to a cheap stunt designed to befool people, divert their grievances, shield turpitude on its part, reap electoral benefits and push common toiling people to immense hardship. We demand that the government take immediate steps to relieve people from shouldering this additional burden of enormous suffering imposed on them by the power that be. 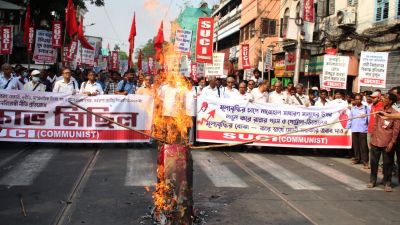