Strongly criticizing the judgment of the Supreme court as delivered on the 7th November 2022 upholding the constitution (one hundred and third amendment) Act 2019 thereby introducing so called 10 percent reservation for the economically weaker section amongst the unreserved categories – Sri Pravash Ghosh General Secretary of the Socialist Unity Centre of India (communist) has issued the following statement on 9 November 2022:-

The November 7th supreme court’s majority based verdict, upholding the validity of the 103rd constitutional amendment which provides 10% reservation for the economically weaker sections (EWS) is utterly disappointing and contains in it potential seeds of inciting animosity amongst the oppressed millions of our country.

It may be recalled that the provision of reservation in job and education for the SCs and STs was made in the Constitution of Indiato address a deep social and cultural issue. It was intended to upliftthe utterly disadvantaged dalits, tribals and other backward strata of people who were oppressed so inhumanly for centuries by the so called upper classes rich people and subsequently neglected by the British rulers,ostensibly to overcome their economic, political, cultural socialbackwardness and to help them to acquire due representation in all walks of life at par with other sections of the people. It was stipulated that this reservation would be for 10 years and thereafter a review should be taken up as to how far this reservation for a limited period had met with its objective.  But that required diligent actions by the governments to mitigate the societal discrimination historically imposed on these sections.  But the fact is that in independent India, the  successive governments subservient to the monopoly capitaldid nothing to elevate the social conditions of these sections of people. Rather, incapable of giving education and job to all, they were  using the policy of reservation as a ploy to divide the oppressed people and to rally one section of poor people against the other. Purpose for which reservation was introduced was never achieved but with the passage of time, the condition of most of the backward and under-privileged sections of the people, predominantly the SCs and STs, progressively worsened further in tandem with the other sections of the downtrodden masses.

In the era of liberalisation and privatization all the bougeous governments are withdrawing from all social welfare schemes and handing over education to private investors. Downsizing has become the norm of governments.

So scope for public education and government jobs is almost nil as scope of job opportunities are drastically squeezing because of all capitalist government’s policy to abolish post and vacancies and thereby making the so calledreservation nothing but a mockery– a tool in the hands of the election-based power-crazy bourgeois political parties to create vote banks by dangling the carrot and pitting one section of the people against another.

What is shocking is that as the inevitable consequence of 75 years of ruthless capitalist exploitation everywhere rich are becoming richer and the poor are becoming poorer today  it is a stark reality that notwithstanding the reservation policy this division of poor people into few rich and the rest becoming poor is clearly manifests and taking advantage of this policy, a creamy layer are using the benefits of this policy of reservation.

Under the circumstance today it is clear that so called reservation policy as had been enacted for uplifting the economically weaker section of the people belonging to general category is doomed to failure and as such it is nothing but a hoax. The only outcome of this clever device is to foment division and conflict amongst the toiling people. We therefore urge upon the countrymen to correctly realize this design of ruling class and close their rank and develop powerful democratic movement seeking fulfillment of their just demand for jobs as it is the only way to force the bourgeois government to concede to their just demands. 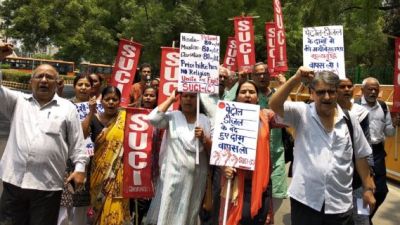 How tax on oil is decided in BJP-ruled India