The BJP-led central government, without caring to consult the educationists, academicians and state governments had announced low cut-off mark for the National Eligibility-cum-Entrance Test (NEET) for MBBS admissions in 2021. As apprehended, this flawed policy is now helping the rich students who can afford to pay hefty fees to get admitted in the private medical colleges. Experts and concerned people have alleged that the low cut-off has practically squeezed the space for high-rankers with low paying capacities. There were around 85,000 MBBS seats to be filled through NEET-UG 2021 scores. Out of these 85,000 seats in the country, 41,190 in 276 private colleges and 43,237 in 286 government colleges. Over 8 lakh students have qualified based on NEET-UG 2021 cut-off which was a low of 138 out of the total possible marks of 720 in the unreserved category, whereas the cut-off for reserved OBC, SC and ST categories were kept at 107. The MBBS seats have gone up augmented from 52,000 in 2014 to over 85,000 in 2021. On the other hand, majority of medical colleges whose number went up by 54% in last 8 years, are private. The average fee charged in India for an entire MBBS course was about Rs 14 lakh at government colleges and about Rs 60-70 lakh at private colleges. This apart, for a proportion of seats that the government has now raised to 50 per cent, the private colleges can decide their own fees—in effect, sell seats to the highest bidder. Meritorious students from the middle-class families who have ranked high, but narrowly missed admission at government medical colleges, are thus deprived of fulfilling their dream of being a doctor whereas students from affluent families with much less merit would be favoured to receive medical degrees. This would laso dilute the standard of qualified doctors in the country.
When NEET was introduced in 2013 removing all provincial medical-entrance examinations, the student organisation AIDSO and the SUCI(C) vehemently opposed that step criticizing it to be a sinister design to commercialize medical education and put paying capacity above merit. That apprehension is proved true today. Peri Maheshwer, a leading career expert, in a Facebook post, questioned this policy of NEET. He said, “NEET is a joke played on Indian students. For 2021, the qualifying marks were 138 out of a possible 720 marks. That is just 19 per cent which would not even make you pass your Class X exam. In 2020, of the 15.4 lakh students who appeared, about 8.7 lakh students qualified. And a student with 7.5 lakh rank also got into a private medical college. This student got 21 per cent marks (the cut-off mark of 2020 was 147, i.e. 20.4%) and will soon be your doctor.”
This is how the BJP government in avid pursuit of reckless privatization of educational institutes and crass subversion of academic autonomy is destroying education in totality. 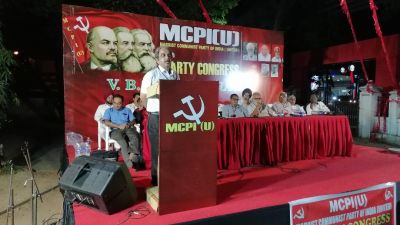