Comrade Anis Kumar Ray, veteran member, West Bengal State Committee, SUCI(C) and a front-ranking leader of education movement who was also intimately involved in publication of Proletarian Era, breathed his last on 29 November 2022 at Calcutta Heart Clinic and Hospital, Kolkata, being afflicted by drug-resistant tuberculosis, kidney dysfunction and cardiac arrest. He was 79.
Comrade Ray was initiated into the Party in late 1960s by Comrade Dhrubajyoti Mukherjee, veteran member of West Bengal State Committee of the Party.
At first, he was associated with Pathikrit, then considered as the cultural front of the Party. Departed Comrade Ashish Moitra, then a front-ranking organizer of Pathikrit, used to go to his former Bhowanipore residence in Kolkata to give him association and thus played an important role in making him closer with Pathikrit. In Pathikrit, he came in contact with Comrade Manik Mukherjee, then an important leader of the SUCI and Editor of Pathikrit magazine and now a veteran Polit Bureau member, SUCI(C). After that, there was no looking back. Under the supervision and guidance of Comrade Manik Mukherjee, he within a short time became a leading activist of not only Pathikrit but also the Party. In course of his avid pursuit of Marxism-Leninism-Shibdas Ghosh Thought and commendable struggle for identification with the Party, he could make much advancement in acquiring revolutionary character so much so as to be entrusted with the responsibility of being the in-charge of the Party body working in Pathikrit. He had a brilliant academic career. After obtaining his Masters in Geology, he, at a very young age, almost immediately after his post-graduation, started teaching in the prestigious Presidency College of Kolkata. Later he obtained his doctorate degree in paleontology as well. His simple and unassuming nature, profound knowledge of his subject, lucid exposition and teaching ability made him extremely endearing to his students. He was equally adept in writing, both in English and in Bengali. So, he soon became a major pen for both Bengali Pathikrit magazine and Trend, the English magazine of Pathikrit. His pen flourished more and more under Comrade Manik Mukherjee’s rearing and caring guidance and with his progress in cultiveting Party ideology. He had involved himself in the then newly formed Government College Teachers’ Association to take forward the legitimate movement of the college teachers. Comrade Ray perfectly blended his Party life with his professional life and thus could make them conducive to each other in serving the revolutionary cause.
Comrade Ray had sharpened his writing skill based on his grasping of Party ideology so much so that he was included in the writers’ panel of Ganadabi, the Bengali organ of the Party. A couple of important Bengali booklets of the Party were drafted by him under the guidance of the Party leadership. From mid-2003, he was assigned the job of writing for Proletarian Era under the supervision of Comrade Asit Bhattacharyya, veteran Polit Bureau member of the Party. His allegiance to the Party and Party leadership was exemplary. He had not hesitated a bit to work under the leadership of comrades much younger than him in age including his college students. This indeed is very educative for all of us. He possessed the rare quality of discharging all his responsibilities to the best of his ability without creating any noise and thus made valuable contributions to the sphere of ideological struggle of the Party. He inspired both his wife and youngest sister to join the Party. Even his children are also good supporters of the Party. In fact, he took the Party to the inner core of his family as well as friends and students.
After Comrade Gouri Shankar Ghatak passed away in November 2014, Comrade Anis Kumar Ray was elected as the General Secretary of the All India Save Education Committee. There also he left his mark of deftness as a leader steering the education movement against the disastrous education policy of the government and worked in perfect harmony and amity with many other stalwart educationists and eminent intellectuals. Under his leadership, the education movement got a fillip and spread in various states. He was so successful in his assignment that everyone of that public committee unanimously re-elected him as the General Secretary in October 2021. Braving his falling health, he even moved around the country to consolidate the Save Education Committee and inspired the education-loving people to join the education movement. Even when he was in hospital bed, he, with the permission of the attending doctors, participated in education seminars and literary activities.
Beauty of his character was his modest nature, absence of even an iota of self-conceit, extremely tender heart and humble behaviour. It was impossible to guess his profundity of knowledge and variegated opulence of revolutionary qualities from outside. Because of his introvert nature, he was very shy of being at the forefront of any public programme. But when the Party wanted him to do that, he came out of the shackles of his earlier shyness and obeyed Party decision unhesitatingly. In his unexpected demise, the Party has lost an extremely valuable leading comrade and the education and cultural movements are bereaved of an efficient organizer.
Red Salute Comrade Anis Kumar Ray

Reservation : A ploy to deceive the people 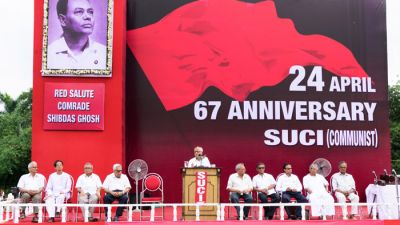 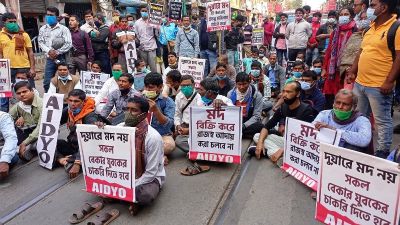