Ignoring the two long-standing major demands for “debt relief” and “increasing the remunerative price of crops by at least 50%” by the toiling peasants across the country as well as taking no concrete step to bring down the prices of agricultural inputs like seeds, fertilizers, pesticides and diesel (used for running shallow pumps), the BJP-led central government, taking advantage of the distressed situation due to rapid transmission of Covid 19 and the lockdown induced by it,  issued three brazenly anti-peasant ordinances on 5 June and subsequently hurriedly legalized those by orchestrating passage in both houses of the parliament through voice vote. These new enactments have ensured absolute dominance of the domestic and foreign monopoly houses on the entire agricultural sector of the country which would entail total ruination of the peasants, especially small,marginal and medium peasants as also the agricultural labourers. This heinous move, that too at a time the entire country is gripped by an unprecedented pandemic and collapse of economy, only show how eager the BJP government is to serve the vested class interest of the ruthlessly oppressive monopolists caring a fig for the poor peasants struggling day in and day out to eke out a bare living. No language is enough to condemn this sinister step.

Spectre of monopoly takeover of agriculture which has long been haunting is now made a reality. The amendment of the ‘Essential Commodities Act 1955’ has now provided a legal sanction to stock essential food articles like cereals, pulses, oilseeds, edible oils, potatoes and onions in whatever quantity desired by the hoarders.  Sanction of unlimited hoarding would only trigger black-marketing and price manipulation of food items imperilling food security. The hoarders and blackmarketers, masqueraded as traders or cold-storage owners or branded agri-companies, would merrily buy the items at cheapest price from the peasants, store them in huge quantity in their godowns, create an artificial shortage in the market and then release stockpiled articles selectively to be sold to the common people at  exorbitant price to reap maximum profit. Hence, galloping rise in prices of essential food items is on the anvil. The government would not intervene till the average price of food items does not rise beyond 50% in one year (for perishable commodities, it is 100%).  So, it would be a free hunting ground for the corporate sharks. Along with the farmers, poor consumers will to bear the maximum brunt of this rabid pro-monopolist policy.  Already India is abode of 1/3rd of the hungry people in the world. Over 20 crore Indians sleep hungry every day. Over 7000 Indians die of hunger every day.Under-nutrition remains a silent emergency in India, with almost 50 percent of Indian children underweight and more  than  70  percent  of  the  women  and children with serious nutritional deficiencies as anaemia. Around 84 crore Indians are reported to be surviving on less than Rs. 20 a day. So, this  so  called  liberalization  of  hoarding  and black-marketing would worsen the situation further.

‘Farmer Produce Trade and Commerce (Promotion and Facilitation) Bill, 2020’ has abolished whatever little protection the peasants hitherto had in selling their produce at a reasonable price under the Agricultural Produce Marketing Committee (APMC) Act. Notwithstanding so called retention of government control on the existing agricultural mandis(rural crop procurement outlets), albeit confined within the mandi site only,  the network of private agricultural mandis owned by agri-giants including agri-MNCs has been allowed to spread across the country. Outside the mandis, the giant agri-corporate companies can now buy agricultural produce from anywhere as per their choice.  It is being argued that the new law has provided a ‘Raksha Kavach’ (safety net) to the peasants as they are now made ‘free’ from the tentacles of the middlemen  and arhtiyas (owners of warehouses) and can sell their produce directly to any buyer anywhere. Apparently, the argument looks so good. But this is a blatant lie and a deception par excellence!, Under the slogan of ‘One Nation – One Market’, the corporate giants companies would now procure crops from the peasants outside the mandis, stated to be under government control only in paper. It is known to all aware of the agricultural procurement mechanism in the country that an utterly corrupt unholy nexus of officials-rural touts-panchayat members-ruling party leaders-warehouse owners-middlemen has hitherto been controlling the entire procurement machinery depriving the peasants of their dues in various ways and the government administration has been a mute spectator. Now, on the pretext of dismantling this system, the government is handing over the entire agriculture to the corporate and multi-national behemoths as if this would cleanse the system. But who are these agri-giants? Are they benevolent  saints? What is the objective of their business other than profit maximization which is contingent upon squeezing the poor peasants and depriving them of their dues in every possible way? Moreover, they are thousand times powerful, both in terms of financial resources as well as network at command, than the arhatiyas and other players now ruling the roost.

Many giant domestic corporatesseeking to penetrate more in the agri-sector have tie-ups with big foreign multinationals (MNCs). These companies, either alone or in collaboration with the foreign MNCs, will now decide the quality of the crops grading those as A, B, C etc. and buy the crops at the rates of their choice. In fact, if there is any  ‘Raksha Kavach’ in these new laws, then those are provided to these private houses in the form of unbridled right to decide both the nature of the crop to be procured as well as the price. Though the government, under pressure of movement, has announced  Minimum Support Prices (MSP)  for procuring the crops, it has not yet clarified if the agri-corporates are bound to pay MSP to the peasants. Just as the government schools have been systematically made non-functional and replaced by an expensive network of private schools, the same, if not worse, would be case with the agricultural market system once the stranglehold of domestic and foreign monopoly houses is firmed up by demolishing the existing agri-infrastructure. This would, in turn, affect the entire chain of food production and supply imperilling food security.

Empowered by the ‘Farmers (Empowerment and Protection) Agreement of Price Assurance and Fair Services Bill 2020’,the corporate companies, wholesalers, big retailers, exporters and operators in the speculative “futures, options and forward trading” in the capital market would compel the peasants to produce only those crops which would suit their business need and profit maximization objective. Under an agreement, they will provide loans, fertilizers, seeds, tools and farming techniques to the peasants in the name of undertaking ‘farm services’. In return, the peasants would be under compulsion to sell their produce to those “farm services’ providers. The rate at which the crops would be procured by these private operators would be decided before sowing through an agreement.  The agreement would stipulate which crop would be cultivated and for how many years. It may be one or more crops and the period of one to five years or even longer.  As is evident, right from what crop to be grown to where to sell, to whom to sell and at what price to be sold—all would be dictated by the private operators. The peasants would have no say in any of these matters.  In such a situation, the much hyped ‘One Nation-One Market’ would only remain in paper. It would be “multi-markets in multi-places under control of multi-nationals and monopoly groups. It is further stated that the agri-corporates would first recover the amount of loan and cost of other farm services from the sale proceeds. So, no one knows how much the farmers will get in their hands after hard toil. It is stated that if the crops produced by the peasants under contract are pronounced to be of not the stipulated standard by the ‘expert group’ of the giant agri-corporates, the peasants may not be paid 1/3rd of the agreed price. The peasants, if not satisfied with the price received, are debarred from knocking at the door of the court. That means even any legal protection of the poor peasants against any arbitrary and whimsical conduct of the agri-giants is denied. It is pertinent to recall that during the British imperialist rule in the late nineteenth century, the indigo-planter peasants of undivided Bengal entered into such contract farming and then were so devastated as to organize a mass uprising enshrined in the history as “Revolt of the indigo planters”.  One is also aware how the banana planters in the Amazon belt and a host of African countries are devastated because of contract farming with the big MNCs. The BJP leaders are claiming that the peasants will have the freedom to withdraw from this agreement at any point without penalty. With such contract farming  being  made  a  rule  and  the  leash in the hands of the corporate tycoons and giant MNCs, the small and mid-level famers owning one,  one  and  a  half  to  two  acres  of  land would find themselves helpless. If anyone argues that such poor peasants and agri-corporates stand on the same footing, one is only indulging in an absurdity par excellence and deception of the highest order. The law would be in favour of the exploiters and not the exploited. So, the much-trumpetted “freedom of the peasants” by the government and the ruling BJP would seal “permanent servitude” of the peasants as is inevitable in decadent moribund capitalism.

This is the hideous underbelly of the three farm-related bills which the BJP prime minister defended as “laws framed first time in decades that would benefit the farmers”. It is easily understood how precarious would now become the condition of the progressively pauperizing peasants who constitute around 70% of the Indian population. Already four lakh peasants and agricultural workers have committed suicide due to reckless plunder and oppression by the ruling monopolists and the rural kulaks. So many peasants have lost their lands, turned into agricultural labourers, migrant workers and even beggars and footpath dwellers in the cities.  Rural India, as great Lenin had said about capitalism, is now an abode of horror unlimited. The only way the oppressed and repressed peasants can thwart this ruinous attack on their life and livelihood is to build up organized powerful sustained conscious movement under correct leadership. They need to imbibe the truth that their dignity is honoured only in their united struggle against the power that be. All India Kisan Khet Mazdoor Sangathan (AIKKMS) has been engaged in this work since independence.  Highlighting the above points, Comrade Shankar Ghosh, General Secretary, AIKKMS, issued a statement on 20 September 2020.

Now to spearhead a united resistance movement of the peasants based on a common minimum programme against these black bills,  the All India Kisan Sangharsh Coordination Committee (AIKSCC), a massive platform of 250 peasant organizations, has been formed. AIKKMS is an important constituent and integral part of the AIKSCC. AIKSCC had given a call for a countrywide ‘Grameen Bandh’ (Rural Strike) on 25 September which was a grand success with unstinted support received from the farmers, agricultural workers and poor working people. AIKKMS is determined to build up the militant peasants’ movement all over India. As a first step, it has declared 14 October as ‘peasants’ resistance day’ against the anti-peasant bills and other anti-peasant policies of the BJP-led central government. 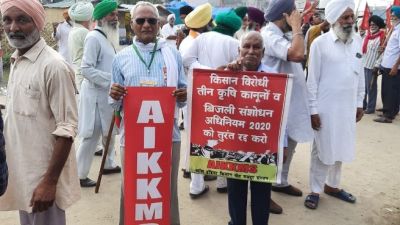 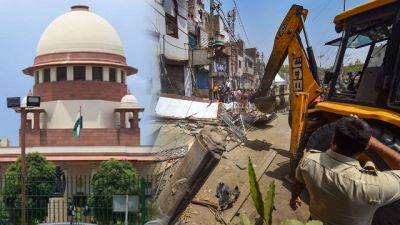 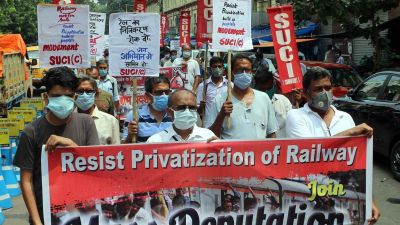