Iran is in ferment. 22-year-old Mahsa Amini, who was detained in Tehran after Iran’s so-called ‘‘morality police’’ found fault with her trousers and headscarf, or hijab, was found dead in police custody on 16 September 2022. Amini’s death triggered an outcry against the morality police from celebrities and prominent figures on social media. The claim of the Iranian government that Amini had died of heart attack has no takers. The protesters are of firm belief that she was mercilessly tortured and killed by the police. The remonstration was so massive and undaunted that the police had to fire tear gas to disperse a protest rally in western Iran following the funeral ceremony. But the protesting Iranians are not unnerved and have been continuing their movement for last three months. More than 450 people are reportedly killed in Iran since protests erupted because of brutal crackdown by Iranian security forces using live ammunition, rubber bullets and tear gas. Around 18,000 have been arrested. Of late, Iran government hanged a man after pronouncing him guilty of injuring a security guard with a knife and blocking a street in Tehran during the movement. It is also reported that Iranian police shot the agitating women targeting delicate parts of their bodies. Yet, the people’s wrath could not be curbed. The protests have spread across the country and drawn support from artists, athletes and other public figures. The unrest has even cast a shadow over the World Cup, with some Iranians actively rooting against their own national team because they see it as being linked to the government. Masih Alinejad, an Iranian journalist and activist, on her social media account shared a video of women cutting their hair and wrote, ‘‘Iranian women show their anger by cutting their hair and burning their hijab to protest against the killing of Mahsa Amini by hijab police.’’ ‘‘From the age of 7 if we do not cover our hair, we won’t be able to go to school or get a job. We are fed up with this gender apartheid regime,’’ she had written.
Finally, sensing people’s mood against the Islamic fundamentalist Iranian government, a senior Iranian official said that Iran had abolished the morality police. However, it was unclear whether the statement amounted to a final decision by the theocratic government, which has neither announced the abolition of the morality police nor denied it. But protesting Iranian women and activists took to social media to dismiss talk of disbanding the force as a propaganda tactic by the government. In fact, as the situation stands today, even if the moral police is abolished, it would hardly please the protesters who are still clashing with other security forces and are calling for an end of the Islamic Republic. Hence the talk of dismantling the moral police, according to the protesting Iranians, is a ploy to distract from the larger demands for an end to the Islamic Republic’s rule.
The crocodile tears shed by the US and its allies over ‘‘torture on women’’ in Iran and pretended wrath against Iranian moral police are typical of the imperialist deceptions. In fact, a large section of US citizens is going to take up cudgels against the so called ‘moral policing’ of their own country. The patriarchal, white-supremacist, Christian-nation folks, who are now the majority on SCOTUS and in the legislatures of many states are using laws instead of guns to condemn people to death—physical, intellectual and emotional death. To punish any woman, gender-nonconforming people, and children pregnant through rape, to attack trans people who need medical treatment to stay strong against bigotry and physical attack, to deny school children factual information about history and health the ‘‘morality police’’ are stalking through every state in the US. (Workers’ World 26-09-2022) Hence, whipping up so much high-toned indignation and scorn toward the ‘‘theocratic government’’ of Iran by the monopoly-controlled western media is nothing but a hoax.

Backdrop of the ongoing movement
The Iranian people over the last four decades have experienced the cruel autocratic face of the Khomeini regime. As we know, religion and fundamentalism are not the same. When religion is used to serve narrow sectarian interest of lucre and power of the bourgeois rulers, it is called fundamentalism. It is true for both Hindu or Islamic or any other kind of fundamentalism. Fundamentalism rests on bigoted religious orthodoxy, fanaticism and patriarchal domination. Hence, it tries to keep the women under subjugation, shackles them with a variety of fetters in the name religious customs, curtails their freedom and virtually enslaves them with a slew of injunctions. True, there are many who wish to see religion and state as separate. This includes also some of those who are true followers of Islam. They are advocating ‘secularization’ of the state to preserve the purity of the Islamic faith in social life without understanding that secularism means state and social life is independent of religion, so adherence or non-adherence to religious faith remains purely the personal affair of an individual. Hence dreaming of a secular country with the customs of Islamic faith patterning social life is akin to a square peg in a round hole. ‘‘Since the Islamic Revolution, all efforts to quell women’s resistance have paradoxically only strengthened and widened it,’’ said one woman protester who was held in solitary confinement and subjected to torture and beatings. ‘‘What started out as a protest movement by secular middle-class women, has now spread to the less affluent, religious social strata, which had served as the backbone of the Islamic regime in the past.’’
The barbaric attack on the rights of the women of Iran, women who have been militantly struggling for freedom and democratic reforms in the country as well as opposing religious fiats to keep them subjugated, is by no means an accidental matter. Attempts to incorporate modern political and social concepts into Islamic canon began since 1950 with the preaching of Islam as a way of life, just like the way the Hindu fundamentalists of India are preaching that Hindutva is a way of life.
Headscarves and a loose tunic or coat worn over regular clothing have been compulsory for women in Iran since the 1979 Islamic Revolution, and members of the morality police enforce the strict dress code. Refusal to submit to its medieval models for women is considered to be a ‘‘sin’’ by the present Iranian rulers. It is five years since Iranian Masih Alinejad in 2017 started a movement protesting against the compulsory wearing of the hijab, or headscarf, in her country. Since then, after dozens of women publicly took off their headscarves in a wave of protests, authorities have adopted tougher measures. The police had warned that women who participate in demonstrations against the hijab could face up to 10 years in prison. In recent months, human rights activists in Iran have been urging women to protest the dress code by removing their veils in public, an act which is likely to lead to their arrest by the authorities.
After Amini’s death, the movement has escalated and spread across the country, with women taking to the streets to burn their hijabs in defiance. Agitators have burnt the statue of Iran’s supreme religious leader Khomene in his own hometown Mashhad amid rising protests after he refrained from commenting on ongoing protests in his first public appearance. ‘‘It is pertinent to mention that the Quran instructs Muslim women and men to dress modestly as concern had been about both men’s and women’s ‘‘gaze, gait, garments, and genitalia’’. (cited by Karnataka High Court in a case and reported in livelaw15-03-22) The holy Quran, as opined by the informed section, therefore, does not mandate wearing of hijab. Yet the religious orthodoxy thrusts such bindings upon women in the name of religious code.

New ray of hope
But history has its own laws. No more the suppressed, persecuted Iranian women are ready to tolerate such inhuman dictates and compromise with their freedom. So, they are out in the street braving all odds. Amina’s martyrdom, instead of restraining them, has provided momentum to the struggle for upholding the cause of the movement. Not only women, but even enlightened men are also joining them in this just struggle facing police atrocities. We wholeheartedly support this movement.
No doubt this stir has shaken the Iranian rulers. But then struggling Iranians particularly the women need to keep in mind that the struggle for emancipation of women is inseparably linked with the broader struggle of revolutionary overthrow of capitalist regime which is wearing a religious cloak in their country. This struggle can only succeed if it is developed on the edifice of true secular values, cultivation of higher morality and culture and in fraternity with their struggling counterparts round the world. Let not any bourgeois trickery or handiwork of religious fundamentalists enfeeble them from within or channelize them along the wrong path to fizzle out with passage of time. Win they must! Tortured women of the world are looking at their struggle to gain sustenance to build up similar struggles in their respective countries. 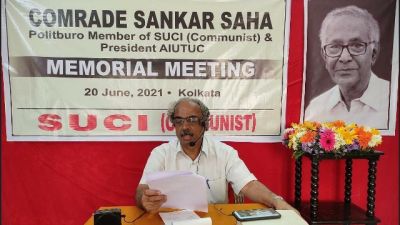 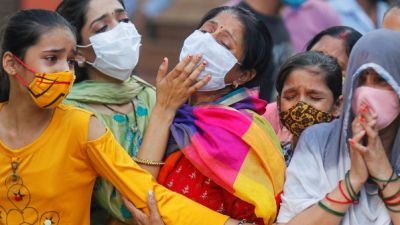