The BJP-led central government has decided to slash Employees’ Provident Fund interest to as low as 8.5% pleading paucity of fund meaning even the least of social security provisions for the working people are being further curtailed. The interest on bank deposits and small savings are being progressively reduced to put the toiling countrymen into more and more peril. On the other hand, the government has been showering a plethora of benefits on the owner capitalist class like waiving hefty bank loans, condoning penalties on defaulted loan, providing a slew of tax concessions under the garb of ‘ease of business’, allowing them to accrue huge black money defrauding the exchequer as also to flee the country with alacrity by embezzling bank loan and above all, swindle Employees’ Provident Fund with impunity. While the working class who are real creators of wealth are being thus pushed to the precipice of further ruination, the government is extraordinarily benevolent on the exploiting capitalist class by calling the latter as the ‘creators of wealth’ and hence ‘deserving honour’. This clearly shows who this government is subservient to and for whom it is wedded to usher in “good days’.
We demand immediate rollback of all anti-working class measures including reduction of PF interest rate. Further, we call upon the working class as well as other sections of the toiling millions to build up in right earnest a long-drawn powerful organized movement along correct line and under correct working class leadership to thwart these murderous attacks on their life and livelihood. 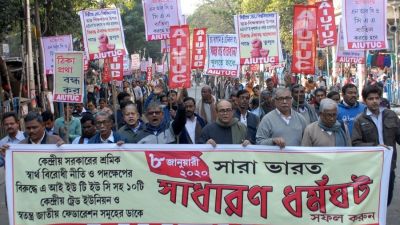 SUCI(C) strongly opposes Goods and Services Tax terming it as brazenly anti-people and calls for building up powerful movement to resist it.