We strongly denounce the decision of steeply hiking petrol and diesel prices once again by Rs 3.07 and Rs 1.90 per litre respectively on the pretext of striking a balance with international crude price and exchange value of rupee which, however, does not correspond to reality. When crude price was $147 per barrel, retail price of petrol was Rs 75 per litre. Right now, when the crude is hovering around $40 per barrel, the petrol is costing Rs 63 per litre. In other words, when international crude price has come down by 367% and the government reportedly has saved close to Rs 1.5 lakh crore in 2015-16 on account of global oil glut, the corresponding fall in retail tariff has been a cosmetic 16% because, instead of passing on the benefits to the common people, the government has appropriated the same by repeatedly increasing excise duty on fuel. Tax components of retail tariff of petrol and diesel at present are around 57% and 55% respectively which make the Indian retail prices virtually double the global price of oil.

We call upon the people to rise in powerful protest against this most unjust policy of the government of denying them the due relief by pursuing exploitative fiscal policy wreaking havoc in their life. 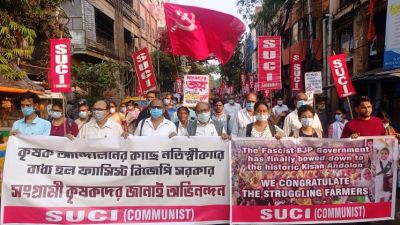