Quite recently, with the TMC in the state government, elections were held for 92 municipal bodies of the state of West Bengal including the Kolkata Municipal Corporation. The KMC election on 18 April preceded others proving that elsewhere it was not going to be anything other than a carbon copy of elections held in earlier regimes under different other political parties. It meant notwithstanding change in governments, such “free and fair election” runs on unchanged. In 3 out of 91 municipalities the TMC had won “uncontested”, meaning that none else was allowed to contest. The rest of the drama was enacted on 25 April when 88 other municipalities went to the polls.

Everything was “free”, that is unchecked: booth capturing, freely pressing the button, inking voters’ fingers and sending them back to their home without casting votes, charging bombs at or near the booths, opening fire leading even to killing and many such sacred means of “ free and fair” election” to rob votes freely. In Kolkata itself during the poll date near Girish Park in north Kolkata, a police officer was hit by the bullet fired upon him by the goons of the ruling party, TMC. The police Commissioner did not even have the guts to mention the political identity of or patronage behind the culprits. Where the police itself including its CP was in such a shameful state, it can be well assumed what would be the condition of people at large. Everywhere on the poll date right from the morning the band of TMC goons came out flexing muscles at and around particularly chosen wards and booths where there was slightest possibilities of the opposition coming ahead of the ruling party. The police did not remain silent spectators; they openly carried out orders from the local leaders of the TMC. If and when the limit was palpably transgressed, they raised a meek voice of disapproval. The much-hyped Central force was left standing at some distance to oversee the drama. Troubles were not confined to wards where the opposition was strong; rather in any ward, be it in Cossipore area of Kolkata or in districts, with candidates of dissident TMC in the fray, thanks to their inner party squabble for power and pelf, things turned out worse. 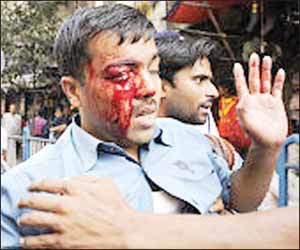 KOLKATA, INDIA – FEBRUARY 5: Injured SUCI worker is being taken to hospital after the police lathicharge during their protest against alleged anti-people policies of State and Central government at Esplanade on February 5, 2015 in Kolkata, India. The situation turned violent as Socialist Unity Centre of India workers tried to break a police barricade soon after their meeting, in support of their 18-point demands. (Photo by Subhendu Ghosh/Hindustan Times via Getty Images)

After all those bloodshed and accompanying anarchy, the Chief Minister proudly announced that she had never seen any polling to have taken place in such a nice ambience.

Perhaps more than ridiculous and pitiable was the role of the State Election Commission, supposed to ensure “ free and fair” elections. The Commissioner once admitted that ‘the polling did not take place in ideal condition’; the very next day he chewed his words, faltered in public glare and submitted that the polling had taken place in a fair and democratic environment. After 25 April he even refrained from making any comment on whether the polling was free or not. He just provided the media-men with a list of troubled spots adding his comment to read it out themselves from it. What a shamefully sorry figure the Commissioner had cut for himself; was it merely for keeping his career record unstained!

Now the point is, the TMC knew that there was no formidable opposition to face in this election. Why then they had to take recourse to such muscle flexing, such palpably unfair methods? Slightest scanning of recent elections, be it of parliament or assembly or panchayyats or municipalities, would clearly reveal that that bourgeois democracy has been reduced to this. This is the face hid behind all tall talks of democracy, of “free and fairness” ! This bourgeois democracy and the bourgeois political parties no longer put faith upon people’s support. They sustain really upon money power- muscle power- administrative power. So people have the least role to play in this event of elections in democracy. In the last parliamentary election, the big corporates, the leading monopoly houses opened their coffer to launch a media hype to paint and pose Narendra Modi as the saviour of the country and place him at the helm of the governance. The corporate and section of media under their control tried the same trick in West Bengal too to push the BJP through. But even the brief rule of the BJP government at the Centre has torn open its real face to the people; the enthusiast event managers have learnt that it would not be easy for the BJP to take root into the soil of West Bengal. Instead the revelation has led the big and regional capitalists and the media to put their stake upon the TMC with liberal funds and campaign for them, with raising of mafia groups for the ruling party, or with flooding the poll process with freebies and money. The result was that long ahead of the polls, the big media houses could confidently and unambiguously conclude that the TMC would return victorious though in reality people were fuming with the misrule of the TMC, murmurs of discontent- disapproval- disenchantment could be heard at the slightest effort. 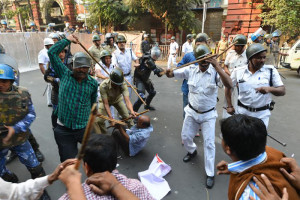 Some people seem to bear an opinion that people brought the TMC to power for a radical change, with an eye to bringing an end to the misrule of the CPI(M). With its subsequent performance, the TMC has crushed their hope. Our Party have always raised caution against such a view and have said that we do not believe the TMC would and could bring in any change of worth. At most they could ensure administrative neutrality, could put a check to nepotism and corruption and do some such work, that too hardly to be hoped. But that was what could be expected from any other bourgeois party than the TMC. And like all other bourgeois parties, the TMC know that their real sustenance comes not from any support from people; what they need are the money bag of the capitalists, bands of armed goons and effortless, sterile, if not partisan, police-administration and election commission. Only these could ensure their success in the vote-battles. That is why, the TMC did not take any risk and went straight ahead with the bands of goons, musket-mongers and such other killers.

The TMC is a bourgeois party and they have gone the way it was expected of them. But there are still other disturbing facts. In West Bengal, the CPI(M) , now the largest opposition, had been in power for a long stretch of 34 years. Not rarely the CPI(M) leaders and party workers would be found to be boasting of that. But should not they give a thought to a bitter question: Why, in spite of their being in power for such a long tenure and in spite of their garnering a massive support from people, they could not put up any effective resistance against the TMC, why people still end in despair saying: “They are now doing what the others did earlier”.

Such being the reality, what is required is unhesitating admission of earlier mistakes and misdeeds to regain people’s confidence and reestablish the prestige and honour of leftism. Along with that, there should be united militant class struggle and mass movements to be led united by the left parties and developed on the edifice of higher values and fighting politics. At the grassroots there must develop people’s struggle committees and volunteer forces as instruments of struggle. While these are the tasks laid out for the political cadres, people have their own. They should realize that if they chose to be hoodwinked repeatedly by the campaigns of the bourgeois media, chose to withdraw from fear of armed criminals or chose to give in to the temptations of money or freebies, the maladies they now face will simply go on deepening. People themselves would have no choice but to lament at their own helplessness. 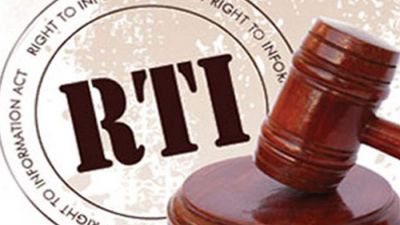 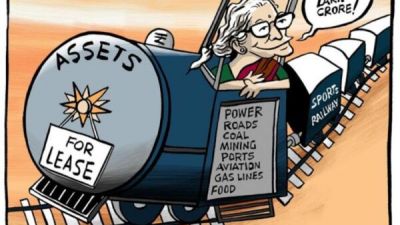